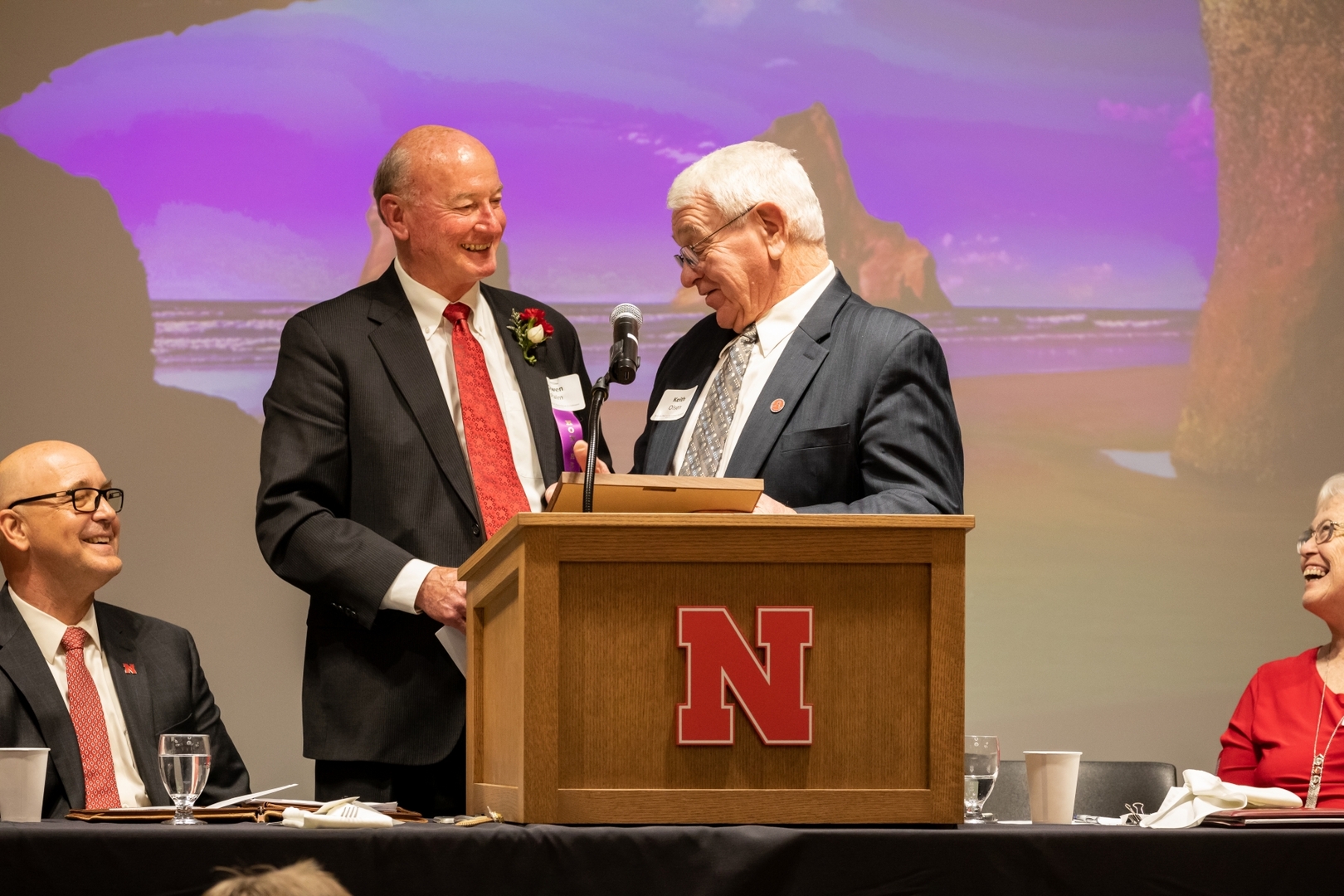 The Nebraska Hall of Agricultural Achievement recognized four honorees and inducted 15 new members during its annual banquet, held on the University of Nebraska-Lincoln’s East Campus. Formed in 1916, the Nebraska Hall of Agricultural Achievement is dedicated to preserving and improving Nebraska's agriculture. Each year, the group recognizes at least one honoree and elects new members. Honorees are recognized for their contributions to Nebraska Agriculture.

Owen Palm has been recognized as a 2022 Nebraska Hall of Agricultural Achievement honoree.

Owen Palm has given much to agricultural communities in western Nebraska, the state, the region, and the country. He has contributed to UNL-IANR, Western Nebraska Community College, various natural resources groups, and fellow neighbors when local devastation occurs. Perhaps Owen’s most important contribution to Nebraska agriculture has been through his knowledge of sharing opportunities and field day demonstrations with farmers and ranchers.

Early in Owen’s career, he was CEO of Western Sugar Cooperative, the major sugar company in Nebraska, Colorado, and Wyoming comprised of six sugar-processing facilities. In 1996, Owen, his family and two additional partners organized 21st Century Equipment by purchasing a John Deere dealership in Alliance, NE. This initial purchase has since grown into 16 locations throughout the region, with over 350 employees. Recently the 21st Century group purchased Irrigation Specialties, the Valley Center Pivot dealership in Gering, NE which has also shown considerable growth.

Not only has Owen provided financial resources to Nebraska agriculture, but he has also volunteered countless hours to his community to improve the quality of life for fellow community members. Owen made a tremendous commitment to the Scotts Bluff County YMCA and served as board president for several years. He consistently looks to improve the community and its economic state and has served as a leader in attracting new industries to the region.

In 2005, Owen was named “Citizen of the Year,” by the Scottsbluff Star Herald. Additionally, in 2016, he was inducted into the Nebraska Chamber of Commerce and Industry Hall of fame. Due to his leadership and commitment to Nebraska commerce, Governor Rickets and previous University of Nebraska President Hank Bounds asked Owen to co-chair the “Blueprint Nebraska” initiative. This assignment exemplifies the faith Governor Rickets and Dr. Bounds have in his skills to develop a long-range economic plan for Nebraska.

Owen has made several recent and important contributions to the state of Nebraska. By providing leadership and help, Owen continues to reach out and support others- be it a student in need of training, a farmer in need of financial assistance, or funding a community betterment project. Owen’s most recent fund-raising effort aided western Nebraska and Wyoming farmers and ranchers who were adversely impacted when a major irrigation canal failed resulting in irrigation water loss. In addition, Owen joined forces with another entity to organize major benefit activities, including a major concert for affected farmers raising over $200,000.

Also during the ceremony, NHAA inducted two new cohorts of members – nine nominated in the fall of 2019, who were to have been inducted during the March 2020 banquet, and six nominated in 2021.